skip to main | skip to sidebar

Check out this review of Friendly Fires with the xx from the Dise last weekend! Thanks to our Twitter Follower @theprintedword 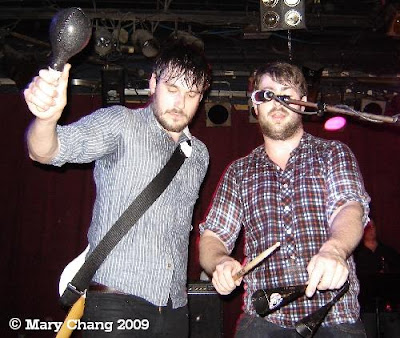 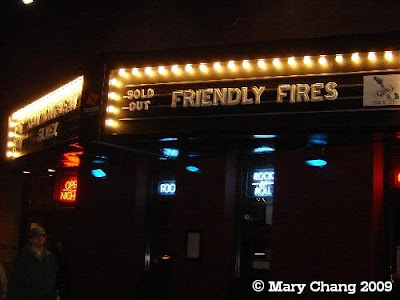 Here is the article, but check out the actual page by CLICKING HERE and see some amazing pics!

The inaugural Winter Nylon Music Tour stopped by Boston’s Paradise Friday night for an absolutely, positively sold-out show. If it is humanly possible, both the headliners Friendly Fires and the opener, current darlings of the blogosphere the xx, keep getting better and better with each additional time I have the privilege of seeing them perform. Both are young bands from England, yet with all the globetrotting they’ve done this year, they’ve honed their skills so that every performance will leave you wanting more. When I heard and subsequently groaned inwardly that the Nylon tour would not be stopping by Washington, I decided a trip up north was in order.

In the case of London’s the xx, their sound is relatively simplistic, but they are extremely successful in bringing out the emotions of anyone who’s ever felt anything for someone else or perhaps more accurately, the xxmake you feel you aren’t alone when you’ve lost that magical thing called love. I still can’t get over how guitarist Romy Madley-Croft and bassist Oliver Sim’s voices, though gentle, can be so poignant and achingly beautiful, causing you the listener to feel the same yearning that exists in the heart of their songs in your bones.

This was the first time the band had ever played in Boston (not counting the in-store they played three hours earlier at Newbury Comics), and the excited crowd was certainly appreciative of their visit. They took to the stage on time at 9. The extended live version of “Basic Space,” their second single released on Young Turks in the UK in August, confused some members of the audience, some of them prematurely clapping while the band headed into an outro not on the album. “Fantasy,” starting off with Sim’s spare, scorching vocals paired with Madley-Croft’s fantastic guitar playing, was a major highlight, as was “Nighttime,” with such monstrous beats from Jamie Smith that you felt the backbeats pounding through your body.

“Infinity,” an example of serious yearning turned into an xx song, starts with guitar work that is as sensual at those in Chris Isaak’s “Wicked Game.” But what the xx’s tune has over Isaak’s are the call and response lyrics of “I can’t give it up / to someone else’s touch / because I care too much” between Madley-Croft and Sim, punctuated by Smith’s drum machine and cymbal crashing. Talk about dramatic to the max and perfectly suited for their usual black attire and minimalist stage set-up. Be sure to catch this trio when they tour America starting in March 2010, first on a short tour of their own on the eastern half of the U.S., followed by a couple of dates opening for Hot Chip.

Like clockwork, crew set up quickly for the main event, St. Albans’ own Friendly Fires, so that they were ready to roll punctually at the Paradise-appointed time of 10:15. This band’s shows are 100 times better than their records because you get the full audio and visual experience right in front of you. On this particular night, multi-colored lights flashed feverishly across the stage, lending a carnival-like atmosphere quite appropriate for this kind of music. On stage left is drummer Jack Savidgeon his riser, beating on his drums at a furious pace that it’s a wonder he ever manages to leave a gig with his hands intact. In the center of it all is lead singer Ed Macfarlane with his bevy of synthesizers ever at the ready, in front of touring bassist Rob Leeand their touring brass section (trumpeter and saxophonist). And lastly and certainly not least, on stage right is guitarist Edd Gibson shredding it on his axe in a way that should inspire generations to pick up a guitar and try it for themselves.

Having not seen them in about four months, I’d nearly forgotten just how tremendously punishing physically their set is on all the players. This was their second to last date on a grueling 3-week tour of North America, and I’d heard that everyone by this point was exhausted (and understandably so). However, I didn’t see any indication that the band wasn’t giving their usual 110%. When it came time for Macfarlane to break out his now world-famous dance moves, the man showed no sign of fatigue, most memorably on the wonky-waltzy “White Diamonds,” to which he threw his whole body into the song. “Photobooth,” an ode to young lovers taking an innocent photograph together, was preceded by him saying, “Are you going to join us [in the revelry and dance]?” Thanks to a long guitar cord, throughout the set Gibson was able to run back and forth across the Paradise stage, climbing on top of a speaker in front of Savidge several times to serenade those up in the balcony. So very rock ‘n’ roll.

While the throng was vocal in their appreciation for the Fires’ music, some people in the crowd clearly needed to loosen up, so much that Ed Mac had to implore, “Come on Boston, dance with me, please!” When they played “On Board,” then “Paris” (the obvious crowd-pleaser), the audience was finally moving and grooving in a way that the band approved. While it was disappointing that they played the exact same set list that I’ve gotten used to and we didn’t get a preview of the four songs Friendly Fires have already finished for album #2, we’ll have the new material and a brand-new set list to look forward to the next time they visit us stateside. The band’s sophomore album is expected to be released in May 2010. I can’t wait.

Posted by Paradise Rock Club at 8:14 AM